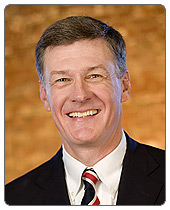 Dr. Steven J. Lawson is the Senior Pastor of Christ Fellowship Baptist Church in Mobile, Alabama, having served as a pastor in Arkansas and Alabama for the past twenty-nine years. He is a graduate of Texas Tech University (B.B.A.), Dallas Theological Seminary (Th.M.), and Reformed Theological Seminary (D. Min.)

The focus of Dr. Lawson’s ministry is the verse-by-verse exposition of God’s Word. The overflow of this study and preaching has led to his authoring fifteen books, his newest being The Unwavering Resolve of Jonathan Edwards. His other recent books include The Expository Genius of John Calvin, Foundations of Grace 1400 BC-AD 100, volume one of a multi-volume series, and three volumes in the Holman Old Testament Commentary Series, Job, Psalms Volume I (Psalms 1-75), and Volume II (Psalms 76-150).

He has contributed to John Calvin: A Heart for Devotion, Doctrine, and Doxology, work celebrating the 500 year anniversary of the birth of John Calvin. He is the Series Editor for A Long Line of Godly Men Profile, a series of biographies of noted Christian leaders.

He is president of New Reformation, a ministry designed to bring about biblical reformation in the church today. He serves on the Executive Board of The Master’s Seminary and College and is a Teaching Fellow with Ligonier Ministries and a Visiting Professor at the Ligonier Academy, teaching Expository Preaching and Evangelism and Missions in the Doctor of Ministry program.

Dr. Lawson taught in the Distinguished Scholars Lecture Series at The Master’s Seminary, lecturing in 2004 on “Expository Preaching of the Psalms.” He also serves on the Advisory Council for Samara Preachers’ Institute & Theological Seminary, Samara, Russia.

Steve and his wife Anne have three sons, Andrew, James, and John, and a daughter, Grace Anne.